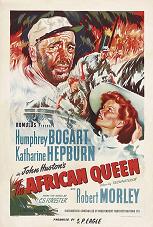 Update:  Classicflix.com has just issued a correction saying their source was wrong and this is nowhere to be found on Paramount’s release schedule.  I might just have to finally import this.

There are more movies out there in the world that people wish would come to DVD than you can count, but there’s one film at the top of most people’s lists.  Well, it looks like we can finally cross John Huston’s classic, The African Queen, off that list.

Classicflix.com is reporting that Paramount has scheduled the film for release on October 13th as part of the Paramount Centennial Collection series.  This is great news for fans of great cinema, but MIGHT be a disappointment for HD geeks.  None of the other Centennial Collection films have been release on BluRay, so it’s probably a pretty safe bet that this one will be DVD only.  Stranger things have happened, but don’t get your hopes up too terribly high.  No special features have been anounced yet, but I’d frankly buy a single-layer flipper disc if it meant I got this on DVD.

I discovered this movie on VHS purely by coincidence at least five years ago and have been eagerly waiting for this glorious news.  I’ve embedded the trailer below.