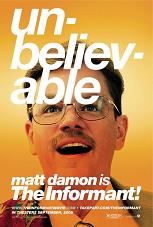 Two 90’s indie wunderkids Steven Soderbergh and Quentin Tarantino putting out movies so close to each other in the same year got me thinking. Why isn’t Soderbergh regarded in the same way as Tarantino? I mean, they’re both obviously well-regarded. But why does nobody see that Soderbergh is obviously just as much of a cinephile? With every movie he clearly wears his influences on his sleeve. Many of his arthouse experimental films and even mainstream Hollywood films are clearly influenced by French New Wave cinema. And Soderbergh’s newest is one that also harkens back. But instead this is a direct homage to 60’s and 70’s espionage films. And hell, even somewhat of a love letter to John Grisham novels that you read in the airport.

Matt Damon is The Informant! The Informant being Mark Whitarce. A biochemical engineer/executive turned corporate whistleblower. The whistleblower part being very clear seeing as how I was given a free whistle after the movie with Damon’s face on it. Anyway, Whitarce spends a lot of the movie narrating. Much of this having to due with corn, an area of expertise for him. But there are also ruminations on paranoia, the truth, good guys/bad guys and other deep things. But also put through the filter of his bipolar mind. Soderbergh uses the retro spy music and font to highlight Whitarce’s state of mind as he travels around the world, wearing a wire and getting the “bad guys”. Whitarce even refers to himself as “0014”, since he’s “twice as smart as 007”. But this all comes to bite him in the behind.

The Informant! then shifts into a cycle of Whitarce admitting that he lied and his FBI agent handlers looking horrified. This makes up about a good 15-20 minutes of the movie. By the third act it completely turns into Whitarce trying to cover his behind and telling only more lies. Eventually millions of dollars are at stake. But he keeps on digging himself deeper into a hole. Even when you think a deal has been broken and everything is going to be all right…it only gets worse. This is compelling, but as I alluded to before, the movie seems to be hitting the same beats over and over again. But on the other hand I appreciated how it almost made everything more and more deliciously convoluted. This represents the frustration that everyone has dealing with Whitarce.

Now onto the cast, Damon hits all the right notes. I’m sure most people who know nothing about acting will just think his role was just eating a lot of pizza and acting goofy. But this is an incredibly challenging role. Yes, you have to be goofy. But yet at the same time you have to be based in a hard reality. You can never go into caricature. You have to sell that narration. And he does it. And most of the supporting cast consists of comedians such as Joel McHale, Tony Hale, Scott Adsit, Patton Oswalt and Paul F. Tompkins. It’s hard to think that this isn’t on purpose. While this is a comedy based in reality, the funny people mostly playing it straight only highlights the satire of the situation and the main character.

The second film I saw tonight was a small little film called Passenger Side. It concerns two brothers spending the day riding around Los Angeles. The movie is completely decent. It’s well-written with sharp dialogue, good performances and a surprisingly powerful ending that touched me a lot. There are a lot of shticky things along the way that detract from the overall film, but it didn’t ruin it for me. I’d write more, but to be hoenst, I’m reallllllllly tired.