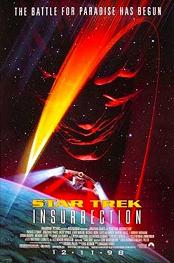 From the oft-heard complaints you hear from Trekkies about the fourth, fifth and ninth Star Trek films, you’d think we Spock-eared, Klingon-spouting fanboys (and girls) had no sense of humor. I’m referring to the “too much humor” issue that is both an asset and a burden to the longstanding (and still going) Star Trek film franchise.  Honestly, when you have classically trained actors standing around in heavy make-up, give deadly-serious monologues about what is “logical” and, in order to stage a shaking starship, stumble wildly around the “bridge”, dashes of humor are more than welcome.

The ample laughs in Star Trek IV come from character-driven humor that fits directly with the movie’s unusual story. The even-broader comic tone of Star Trek V is far less successful and, many believe, the reason the movie fails altogether. In Star Trek:  Insurrection, the problem is more evident- whereas the first scene of Star Trek V had the jarring image of a laughing Vulcan, nothing in William Shatner’s uneven but ambitious directorial debut is as strange as the site of Captain Picard (an always game Patrick Stewart) dancing to the mambo. Or Worf (Michael Dorn) getting a pimple. Or when Data (the always great Brent Spiner), Worf and Picard sing along to show tunes (makes you kind of long for a campfire sing-a-long of “Row-Row-Row-Your-Boat”). Or, in the most jaw-droppingly campy moment of the movie, when Commander Riker (Jonathan Frakes, also the film’s director) and Commander Troi (the fetching Marina Sirtis) share a bubble bath, together, while Riker shaves off his beard (!).

The moments in question scattered throughout Insurrection that aim to be whimsical are painfully out of place and it hurts an otherwise enjoyable movie.Star Trek:  Insurrection had an uphill battle to begin with, as the prior Trek film, First Contact, was not only a gigantic hit but rightfully considered one of the finest Trek films, with its eye-popping visual effects, a great villainess, and (like The Voyage Home) a thrilling time travel story that had just the right dose of humor.  Insurrection is best when the action and special effects take the spotlight, and just so-so at everything else. The villain (played by F. Murray Abraham) is grotesque and one-note, the story (a Fountain of Youth morality parable) isn’t as fleshed out as it could have been and Frakes’ direction (rock-solid in First Contact) isn’t as steady as before.The best thing about Insurrection is that nearly every member of The Next Generation crew has an acting showcase. The best scenes include a great moment where Geordi (Levar Burton) gets to experience newfound sight and a lovely bit where Picard witnesses time literally slowing down, while sharing a moment of romantic bliss.
the muscle maximizer

In film and on television, Star Trek has often provided a means to explore daring, topical and sociological material through the medium of science fiction. Everything that is heartfelt, exciting, imaginative, moving and genuinely funny about Star Trek has always overshadowed the stuff that doesn’t work (like obvious sets or clunky dialogue). In Star Trek:  Insurrection, only the little things work and, instead of being intentionally funny, the movie often comes off as a joke.

Dave Is An Updating Fool!