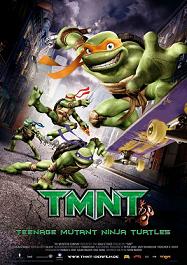 how to learn japanese

Dave's Note:  This was supposed to go up in March, but I slacked and lost track of it.

It’s been exactly one year since the Teenage Mutant Ninja Turtles made their return to the big screen after a 14-year absence. The question on every Shell Head’s mind: when can we expect the sequel, or, more to the point, are we getting a sequel at all? Following a big weekend opening of $24 million, executive producer Harvey Weinstein famously declared, “Cowabunga dudes! It’s sequel time!” The enthusiasm didn’t last, however, when the movie dropped 62% the following weekend and ended up grossing just $54 million domestically (and a little more than that worldwide).  Considering the film cost $35 million to make, the result was a minor hit and a success as a DVD item, but the push for a sequel has yet to take place. Director Kevin Munroe has moved on and is planning another CGI film, called Gatchaman, and there is no TMNT 2 currently being developed at The Weinstein Company or Warner Brothers.

This is a real shame, as TMNT has a loyal and deserved fan base (Screen Geek Dave and I were especially fond of it) and, while the critics mostly gave it a hard time, fans praised it for how good it surprisingly was (especially when you consider how weak the previous two sequels were). The CGI format was ideal for the franchise, as the fight scenes were spectacular and fluid and what may have looked silly with costumed actors (particularly all the monsters and goofily attired villains) had a comic book plausibility in computer generated form. The voice work was especially good (Mako as Splinter, in particular, really brought a lot to the film) and the humor, look and tone felt complimentary to both the previous Turtle films and the edgier comic books upon which it’s based.  My only problem with the film was the story, which felt too busy and unoriginal, with pieces of Ghostbusters, Men in Black, The Shadow and Ghostbusters II all meshed up into a half-baked plot of monsters in statues, a supernatural businessman and a lot of creatures running amuck in New York City.

On the other hand, if this is a “test-run” Ninja Turtles movie, with the sequel having an even stronger plot (and, as hinted, the return of Shredder), then a follow-up sounds, um, Totally Tubular! With the Turtles remaining a well known entity and the goodwill of TMNT, the animated series, the comic book series and the first Teenage Mutant Ninja Turtles movie from 1990 remaining strong as ever, we’ll probably get a sequel/re-start/remake within the next 5-10 years. For now, we have TMNT, which was exceptionally well-produced, exciting and more fun than a lot of bigger films that came out in 2007.

SGR Episode 33 - The Show About Nothing