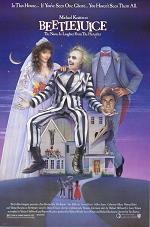 It’s no surprise that Tim Burton’s Beetlejuice, one of the surprise hits of 20 years ago, not only spawned an animated Saturday morning series, but that the series was so well received and a ratings success. Burton’s film is one of the few that can deservedly be called “cartoonish” and have that remark taken as a compliment, and the animated spinoff was a perfect match for the already outlandish, wildly over the top material established on the big screen.

The film fits perfectly in Burton’s filmography, both in terms of style and content. Like Nightmare Before Christmas, Sleepy Hollow, Corpse Bride, Frankenweenie, Sweeney Todd and Mars Attacks!, Beetlejuice takes the subject of death and makes it whimsical and goofy.  Instead of making the ghoulish material genuinely ghastly or grim, we get something on the level of a Looney Tunes cartoon crossed with the sly Addams Family comic strip. The spectacular, candy-colored visuals wouldn’t mean anything if there wasn’t a human center and we get that in the form of The Maitlands. As likably played by Alec Baldwin and Geena Davis in the lead roles, this doomed but chipper couple gives the film its center and we experience the film’s bizarre depiction of the afterlife through their eyes.Michael Keaton’s witty, fiendishly inventive turn as the film’s title character is a showstopper (funny, as he’s barely in the movie overall). In addition to being a pervert, his “bio-exorcist” is also an egotist, and, most amusingly, a romantic. Keaton’s every scene is hilarious and, while the film jump-started his career (as did Clean and Sober and, the following summer’s Batman), it’s a wonder that he didn’t become a bigger star afterwards, as, in this film alone, he demonstrates the kind of mad comic genius that highlight Jim Carrey’s best vehicles.As Burton’s second film, it’s not perfect: the many jokes about the New York bourgeoisie art world have dated, Catherine O’Hara’s performance is grating, and the timing of some scenes feel off. Also, Burton went back and added additional footage of Keaton (after popular test screenings) and you can tell, as Keaton’s make-up looks different in some scenes. Overall, the movie holds up nicely and always has oodles of wonderful sight gags and another goody up its sleeve from scene-to-scene (the waiting room sequences and Sylvia Sydney’s case worker are still a riot). Best of all is Danny Elfman’s exciting score, which complements the film perfectly and is a versatile, madcap creation unto itself.  Unlike The Flintstones or Speed Racer, Burton’s film really seems to exist in a cartoon universe and, while not his best film, it’s sometimes brilliant, surprisingly sweet and fantastically funny.