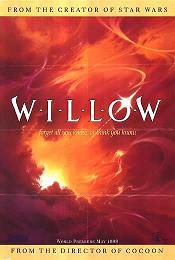 This month marks 20 years since the theatrical release of Willow, the fantasy written and produced by George Lucas and directed by Ron Howard.  When it was revealed that the film was being made, many believed that the title was the codename for a new Star Wars movie (sadly, they had to wait 10 more years for another Star Wars episode). Instead, we have Lucas’ obvious attempt at creating a fantasy film series on the level of Tolkien’s Lord of the Rings series, crossed with the blue print of Star Wars, and a dash of the Old Testament.  Willow was intended as a starter film, the equivalent of The Hobbit, with three bigger, more elaborate films to follow. Lucas’ hopes of putting Star Wars to rest for a while and expanding into another genre were thwarted when Willow was only a mid-sized box office hit and, while a money-maker, a minor disappointment (the three installments that were to follow were released as books, Shadow Moon, Shadow Dawn and Shadow Star, written by Lucas and X-men writer Chris Claremont).  On video, however, the film became a huge cult film and is now rightfully considered one of the finest American fantasy films ever made.

Originality is clearly not the film’s strong point, especially since the characters are clearly meant to invoke Star Wars (Han Solo/Madmartigan, Luke Skywalker/Willow Ufgood, Darth Vader/General Kael, Leia/Sorsha, High Aldwin/Yoda, R2-D2 and C3PO/The Brownies, and on and on).  The story takes a while to get going and the mixture of silly slapstick and some really intense scenes don’t always mix. Yet, when a movie is this exciting, all is forgiven.

The actors bring a lot of heart to their roles, starting with Warwick Davis, solid in the title role, Jean Marsh as the nasty Queen Bavmorda and, above all, Val Kilmer, who steals every second of screen time he has as the swaggering Madmartigan. Some of the supporting characters are robbed of proper screen time (particularly Joanne Whaley as Sorsha) and remain underdeveloped but the large ensemble cast does fine work overall. Howard really brings Lucas’ uneven but mostly enthralling screenplay to life. The film is on par with Dragonslayer and better than Ridley Scott’s far more problematic Legend (though Scott’s little-seen director’s cut is superior). The then-groundbreaking visual effects still look great and are on the level of the most amazing effects from Return of the Jedi and the Indiana Jones films. Most remember the film’s breakthrough first use of “morphing”, but much better is the battle with the two-headed dragon and the beautiful forest encounter with a cluster of fairies.  James Horner’s thrilling score is so good, it was used in all of the trailers for Robin Hood- Prince of Thieves.  The big set pieces deliver, particularly all of the bloody sword battles, the humor mostly works (The Brownies are hit and miss, but Madmartigan is hilarious throughout) and the story, while not fresh, is both grandly epic and genuinely sweet.

Willow isn’t perfect, but the best sequences are terrific and, for a movie that’s 20 years old, it stands tall as one of the few movies you watched repeatedly as a kid that holds up mightily well.