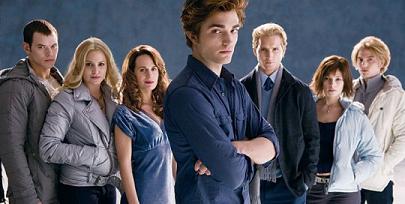 Twilight was one of your typical post-Potter young adults novels until one day…it spread. It came to the point of mass hysteria. Thousands of teen girls invaded this year’s San Diego Comic-Con (a haven for the geeky) on the day of the Twilight panel. Many internet bloggers commented on how they ruined their Comic-Con experience with their high pitched screams and inane questions aired at the cast. And since, they have stormed book stores to meet the cast. Causing near-riots. So yes, Twilight is like that new hot boy band. But here’s the thing, with a projected 60-70 Million opening weekend, this franchise is not going to go away. We are going to get sequel after sequel. And this makes me both scared and a little annoyed.Okay, let’s start this off with the obvious, I am not a 15-year old girl. In fact I’m listening to Rush as I type this, so I am in no way a part of this film’s target audience. But still, there has to be something about this that appeals to me, right? I think vampires are cool…but vampires that sparkle instead of die when the sun hits them is really stupid. And from what I’ve gathered, these books are pretty poorly written. With the prose basically being something like “Edward was so beautiful that all his strands of hair were like male erotic dancers who shone upon the moon while granite swords tore into dragons carved from gold.” But c’mon, the entire appeal of these books can’t be that they describe the most beautiful boy in the world. But after doing some more reading…that’s pretty much it.

Research I have done about the sequels to the book show that they contain humans getting pregnant from Vampire venom, pedophile werewolves and many other indications of a sexually repressed human being. Okay, teen girls are reading this and thinking it’s the most amazing thing ever? Uh…scary. And with the stars of the film basically saying in interviews that they find the books stupid, have fun filming them!

Maybe the Twilightphenomenon will fade away. But either way, I will be staying far, far away from any theater showing it this weekend. I don’t want the sparkles to get in my eyes. Am I coming off as slightly elitist in this article? Yeah, I am probably am. But while teens read the Twilight series I will continue reading Cormac McCarthy. While they continue listening to the Jonas Brothers, I will continue listening to Tv On the Radio. And while they see this over and over, I will be seeing the new works of Charlie Kauffman and David Fincher. Oh well.