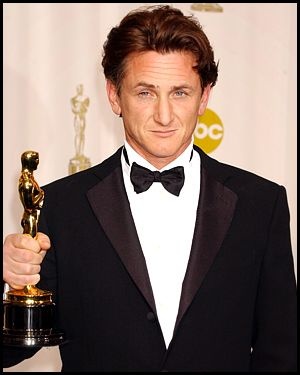 Throughout this Awards season I’ve heard constant negative comments on the internet about Sean Penn. Whenever he seems to win an award for his performance in Milk, many seem to call him a humorless douchebag who only makes movies to win awards and preach his political messages. And I’m frankly tired of this.

First off, whether you like his personality or not, Sean Penn is undeniably one of the most talented actors of his generation. From his performances in Dead Man Walking, Mystic River or even Fast Times at Ridgemont High. You simply cannot look past his talent. And guess what? He’s winning awards for his acting, not his personality. Next off, sure he’s a prick, but so are the majority of actors. Sure, you may be rooting for Mickey Rourke. But he’s done worse things than anybody in Hollywood. And while Penn can seem like a bit of a blowhard, he definitely knows what he’s talking about. He’s not just bashing the right to be anti-establishment. Take for example his recent appearance on Charlie Rose. Watch what he has to say about Proposition 8 and it’s hard not to be moved.

And my final point, you find him humorless? Go see him in the best movie of 2008 and then me that he can’t be a likable, warm presence. Or even just watch his acceptance speech at last night’s SAG Awards. The guy made a freakin’ dick joke. So please, think before you whine.

Leave It To Deadpool To Bring Me Back To Wolverine