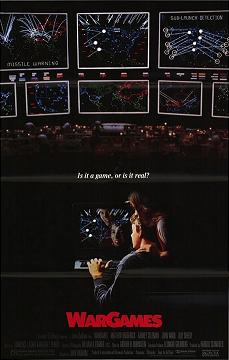 This one has been brewing in my mind for a couple days now.  WarGames is one of my favorite movies from the 80’s.  I remember my folks taking me to see it and how much my dad loved it and still loves it.  Well, /Film is reporting that Leonardo DiCaprio wants to remake WarGames.  I know this is going to be a shock, but here’s an internet guy about to say that it’s going to suck.  What might be different is my reasoning as to why it’s going to suck and how it can’t possibly work today.  I’ll explain after the jump.  *WARNING:  GEEKY EXPLANATION AHEAD*

I’m not necessarily against the idea of all remakes.  Some films lend themselves well to being updated or even brought over from another country.  WarGames isn’t one of those stories.  Most technological thrillers involving kids or hackers over the past thirty years or so have required a certain level of disbelief because most of the technical things they do simply can’t be recreated in real life.  There are two glaring exceptions to this rule:  Sneakers and WarGames.  With Sneakers, I’m talking specifically about the opening scene with the characters hacking into bank systems and screwing with everyone’s money.  The thing is, kids, that stuff and what happens in WarGames was actually possible at the time.

The fact is that internet technology really was like the Wild West up through the mid-90’s.  Up until then, one of the hacker tools of choice was the Commadore 64 and its modem because it didn’t give off a MAC address and it’s easy to spoof an IP address, even to this day.  You may think that a modem that works by putting the phone receiver on a box is a joke, but that’s how it was in 1983.  The thought of hacking into your school to change your grades is impossible to think of now, but people were still getting used to using computers then, let alone thinking about security.  I would assume that even the government was still figuring out how to protect their computers.  It wasn’t a big concern at the time, though, because most people were using their Apple IIe’s to get their typing speed up.  People were still buying Tandy’s from Radio Shack, for crying out loud!  Speaking from a computer viewpoint, it was a MUCH more innocent time.  It was the equivalent of people in the 50’s leaving their houses unlocked when they leave because people just didn’t break into someone else’s house.  That’s honestly why WarGames holds up today.  By making a movie with plausible technology, it makes it more intriguing and involving, if a little dated.  It didn’t rely on technobabble, which kills most of sci-fi today.

With the creation and mass usage of the firewall, security monitoring from ISP’s, the established difference between hackers and crackers and the government flagging e-mails for content, WarGames simply couldn’t happen today by some kid in his folks house who’s a pretty good kid and just likes to tinker with computers.  When you try to remake a movie that had a legitimate level of authenticity in how it presented the technological aspects of the story, you had best find a way to bring that to the remake, and I simply don’t see that happening.  THAT’S why a WarGames remake most likely isn’t going to work.

And yes, my geek is showing.