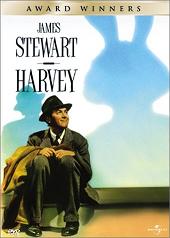 Leave it to remake news to get me to finally write an article.  Friend of the site, Andrew over at gmanreviews, posted a story that Steven Spielberg has lost his fool mind and decided to remake the 1950 Jimmy Stewart classic, Harvey.  I was all set to turn in early, and then this news absolutely set me off.  I decided to turn my geek rampage into an article.  Seriously, I’m about to go Tim Bisley about Spielberg.  I’ll explain after the break.

It’s never been any secret that I haven’t been a fan of Mr. Spielberg for some time.  While his films haven’t connected with me for awhile, there’s never been any doubt of his talent as a filmmaker.  He’s influenced several generations of filmmakers and he’s definitely left his mark on film history.  It’s because of that I voiced hope about his desire to do a project about Abraham Lincoln.  I think he’s still got great films in him.  I really do WANT to connect with his films again.

I see this as three problems.  First, Harvey displays what is arguably Stewart’s best performance of his career.  He spends most of the movie playing off a character who wasn’t even there.  I’m not talking about the way actors today “act” with a character on a green screen stage.  In most of those cases, there’s some gaffer or someone holding something in a place so the actor knows about where to focus.  Harvey is proof of what an amazing actor Stewart was.  He did things the hard way, pantemiming as if Harvey were actually there.  It was Stewart’s performance that led you to believe that Harvey was real because he gave the character actual space and kept the character’s size consistant the whole way through.  Who in the world is Spielberg going to get who has the acting chops to not only pull THAT off, but to also bring the wonderful, genial, gentle man who is Elwood P. Dowd to life?  I can’t think of anyone.  I’d love to hear from people who they think could carry this kind of load.  There’s only so much a director can do in this scenario.  This makes about as much sense as Spielberg basing his Lincoln biopic on the John Ford/Henry Fonda classic, Young Mr. Lincoln.  Yes, the direction is great, but it’s Fonda’s performance that makes it timeless.

Secondly, I don’t think you could make Harvey today.  It’s too laid back a movie, and the studio would insist on there being a six foot tall CGI rabbit to let the audience off the hook and keep them from actually having to engage their collective brain.  Anything like this essentially pisses all over Stewart’s legacy and wonderful performance in this film.

Finally, Spielberg will lose ALL credibility as a person who respects film history if he goes through with this.  This is the man who worked with Francis Ford Coppola and George Lucas to help secure funding for Akira Kurosawa’s Ran and Kagemusha.  It’s clear that Mr. Spielberg was influenced (like many filmmakers of his generation) by films from Kurosawa like The Hidden Fortress and The Seven Samurai.  I’ve always thought it was great to see these young filmmakers pay homage to a true legend.  It made me think that the man has a respect for film history.  We’re talking about a film that was named as one of the ten best fantasy films of all time by the AFI.  We’re not talking about remaking Flight of the Navigator here.  We’re talking about desecrating a true American classic, not to mention one of my favorite films of all time.

I’m not saying that I’ve abandoned all hope with Mr. Spielberg.  I hope he comes to his senses and concentrates on the projects he’s already attached to and lets this idea die.  Should he decide to go through with this, however, I will seriously get rid of everything I own that Spielberg has directed.  It’s not a ton of stuff, but I’ve got some rare stuff that will be disposed of post haste.  Please, Mr. Spielberg, show us all that you’re still a phenomenal filmmaker and don’t do this.  This is the kind of crap a lesser filmmaker would pull.  You aren’t Paul W.S. Anderson, you’re Steven Effing Spielberg!  Besides, you have no idea how long it took me to find a Schindler’s List boxset that didn’t have the pegs broken.