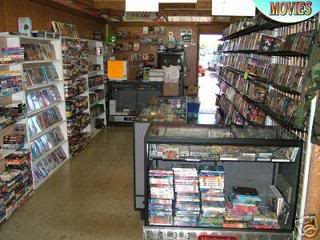 If you’ve been watching the retail home video market at all for the past few months, you know that Movie Gallery/Hollywood Video is in dire financial trouble.  It’s even more obvious if you’re a customer of theirs.  In the city I live in, all five Hollywood Video stores have either closed or are in the midst of liquidation within the last six months.  What you may not know is that Blockbuster Video isn’t fairing much better.  They closed 567 stores last year and plan on closing at least another 250 stores this year.  With these once-mighty corporations on the verge of oblivion, could it be the perfect time for the “mom and pop” video stores to rise again?

I know it’s a long shot to happen, but I do think it’s possible.  The downfall of both of these companies can be attributed to two major things.  The first is that more and more often, people are just interested in walking in, getting something to watch, and walking out.  The reality is that for this kind of customer, there are cheaper options.  For those who want convenience above all else, there’s Redbox.  For those who don’t want to deal with people who know nothing about movies and want a wide selection, you’ve got Netflix.  Both options simply offer a better value.  The second problem is that both companies have lost so many customers that they’ve broadened what they offered in an attempt to essentially fleece their remaining customers for whatever they could try to pry from the customers’ wallets.  Did Movie Gallery/Hollywood REALLY need to sell board games and bobblehead toys?  Did Blockbuster REALLY need to sell overpriced movie posters and all kinds of Twilight crap?  No, they didn’t.  They needed to stop worrying about maximizing profits at any cost and needed to get their focus on what really sunk both companies.

Customer service really went out the window with both companies.  Initially, these corporations put the mom and pop shops out of business by having vastly superior film libraries and lower prices than the locally owned stores could match.  They undercut prices so much that it didn’t matter who they had manning the registers.  They became the only game in town that mattered.  Then, Redbox and Netflix came along.  With even cheaper prices, more delivery options and an even bigger film library, Blockbuster and Movie Gallery suddenly became the new “mom and pop” shop.  The problem is that neither company adjusted to their new role.  They decided that they were just going to keep doing business as usual and pretend these two competitors didn’t even exist.

The biggest question is, if these big corporations can’t make it, what are the chances of an independent store becoming successful?  I think it’s obvious that the days of having 20 mom and pop video stores in a city are long since over.  Yes, Family Video is an up and coming company, but it seems clear that the brick and mortar video rental store is quickly becoming a niche market.  It’s possible for a niche national chain to succeed, but I would think that a locally owned store could have a great chance of being successful.  First of all, most of the mom and pop stores came about during the VHS boom.  It was customary for rental copies of a film to cost $100, so the startup costs for a rental store were astronomical.  I wonder if many of the failed local stores still owed money on some of their VHS movies.  The startup cost for inventory today would be substantially less.  New release DVD’s can routinely be purchased for $15-$20 and even Bluray’s are capping at $30 each generally.  Even looking at the most expensive new release, then, you are still getting 3 copies of a film for less than the price of a VHS back in the day, and that’s not even accounting for inflation.  With the advent of the secondary market for movies (Amazon Marketplace, Ebay, pawn shops, etc.) where you can easily get catalogue titles for $5 a piece, it’s probably never been easier to make a dollar stretch when building rental inventory.

The problem before was the independent rental stores had extremely high overhead costs.  With the drastically reduced upfront cost of DVD/Bluray, that overhead drops significantly.  You simply don’t need to rent a movie out as many times to start turning a profit on it as you used to.  Yes, Redbox and Netflix have lowered the cost a customer is willing to pay.  The lowered startup cost has also made it possible for a retail store to come close to that price.  Many people agree that the magic number for movie rentals is $1 a day.  If you go by old school rental pricing and charge $3 a week for your catalogue titles, you need to rent the film out 2 or 3 times for it to have paid for itself.  If you were to charge $3 for 5 days on new releases, you still need to rent a particular copy of a title 10 times at most for it to turn a profit, but that is still a significantly lower number than it used to be.  Add in selling excess copies at $10 a pop after a title has been out for a month or so and you’ve got a steady revenue stream that can be successful fairly quickly.

The most important thing that a locally owned video rental store can offer is human interaction with the same people.  If someone is willing to take the risk to open a video store, chances are that person is in love with film.  Yes, they’re still going to carry Paul Blart, Twilight and Year One, but they’re also more likely to get in a copy or two of [REC] or Let the Right One In or various Criterion releases.  Even more importantly, they’re more likely to have actually watched the film and be able to tell you about the latest bit of underground celluloid awesome.  Besides building relationships and friendships with a local staff, if you have a customer service issue, you don’t have to call some automated 800 number.  If one of the owners aren’t there when you have your problem, they’re far easier to get ahold of and they’re far more likely to take care of you.  When you have an actual relationship with a business proprietor, they are more likely to take care of you and you are more likely to be more forgiving than if you were dealing with essentially a faceless corporation.

I’m not saying that starting up a video rental store is easy or guaranteed to succeed.  I am, however, saying that this might be a prime time for a few stores to start up and be quite successful.  The conditions appear to to be perfect for a select few to come in have the service and welcoming feel that the market has missed with the downfall of the mom and pop shop, but still also be priced competitively.  It might or might not happen, but don’t be surprised to see them start popping up here and there again.

SGR Episode 108 - Someone To Watch Over Me