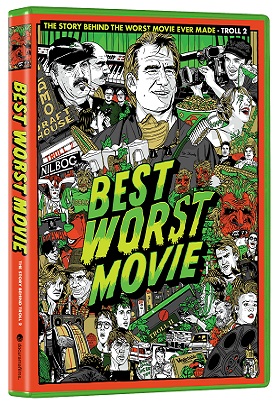 I know that Barry and I have been championing Michael Paul Stephenson’s documentary, Best Worst Movie, for quite some time now.  It even made my top 10 list last year.  I also know the film may not have made come to where you live.  Well, good news came around today that the film will be coming to DVD on November 16th via New Video’s Docuarma Films brand.  The film will also be available in some form of digital medium as well.  I’ll let you know when I get the details on that.

Some of the extras that will be on the DVD will include deleted scenes and over an hour of never-before-seen footage.  You can pre-order the film at Amazon now (and yes, I’ve already ordered my copy and will do a full review of the disc).  Hit the jump to read the full press release.

New York, NY – September 15, 2010 – How many people can claim they starred in the worst movie ever? Michael Paul Stephenson will forever be known as the screaming, whining, ten year-old who saves his family by urinating on their dinner. Today, he is the director and producer of BEST WORST MOVIE, a critically-acclaimed documentary inspired by his role in what has been crowned the worst movie of all time: TROLL 2.

In this hilarious and heartfelt story about the strange nature of celebrity, a sunny Alabama dentist and a self-deluded Italian filmmaker struggle to come to grips with their role in the worst movie ever made. The result is a tender offbeat journey that pays homage to lovers of bad movies and the people who make them, while investigating a deeper story about the catharsis of redemption and the humanity that exists in making even the worst movie ever made.

The DVD and digital release of BEST WORST MOVIE closely follows the Blu-ray release of TROLL 2 in October from MGM.