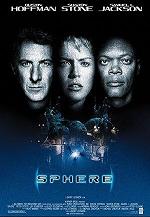 The problem with book-to-film adaptations is that, quite reasonably, the reader expects the highlights of the novel to be in the film. Not too hard to understand, right? Michael Crichton is one of the most popular novelists around and, while some consider his work to be page turning fluff, he deserves his reputation as a science fiction author who cleverly blends known scientific principals with riveting narratives. I’m a fan of his work, though I understand why many dislike his books (and, for the record, “The Lost World” was as bad on the written page as it was on the big screen). Regarding the elaborate adaptation of “Sphere”, directed by Barry Levinson, fans of Crichton rightfully nitpick that, while the film captured the spirit and intellectual intent of the book, it criminally omits the coolest part of the book. More on that later.

Based on Crichton’s 1987 bestseller, the story is nothing new for those who’ve seen “Solaris” (the original), “The Abyss”, or “Alien”; when a giant spaceship is found beneath the ocean, three well regarded scientists (played by Dustin Hoffman, Sharon Stone and Samuel L. Jackson) are sent to investigate. Not only do they find human corpses on board, but the presence of extraterrestrial life. I won’t give away anymore for those who haven’t seen the film or vaguely remember it. Levinson’s film is mostly faithful to the source, with each scene bookended with the novel’s chapter headings (a gimmick that mostly works, as it makes the story come across as an Official Report that is declassified for audiences) and the ending identical to the book. While the special effects are state of the art (the same goes for the sets), the emphasis is on the mind games that the Sphere and the scientists play on each other. Again, most faithful sci-fi fans will see where the story is going and find it quite familiar. In fact, “Event Horizon”, which opened the year before, told a strikingly similar story, though with overt and disturbing horror movie overtones. “Sphere” is more concerned with exploring how human beings are susceptible to madness and unable to communicate with forces they can’t entirely comprehend.

The oddly assembled cast both helps and hurts the film. While one of the best actors of the 20th century, Hoffman is miscast and seems too old for his role. Stone, on one hand, is miscast as Hoffman’s jilted lover (seriously, Stone could eat Hoffman for breakfast!). On the other hand, she overcomes the miscasting by giving an unusually vulne

rable, emotionally charged performance. Jackson is excellent, both glibly funny and genuinely creepy in a key role (watch the funny and unsettling way he possessively reads Jules Verne and seems unfazed by the crisis that goes on around him). The rest of the cast, which includes Liev Schreiber, Peter Coyote, Queen Latifah and Huey Lewis(!), should have just worn the Red Star Trek shirts (or, as Freddy Krueger would regard them, “How sweet! Fresh Meat!!”).

Levinson is best known for films like “Rain Man”, “Good Morning Vietnam”, “Bugsy” and “Man of the Year” (which Screen Geek Dave is a big fan of!), but he also directed “Young Sherlock Holmes” and the uneven but dazzling “Toys”. He clearly has a knack for fantasy but is best when dealing with the human element.

The best scenes in “Sphere” are the verbal tennis matches between the cast, in which the characters struggle to comprehend what is happening to them and are quick to accuse one another of the very worst.

When “Sphere” opened on February 14th, 1998 (yes, almost EXACTLY 10 years ago!), it had the misfortune of premiering against “Titanic”, which opened in December but was, quite remarkably, going strong and was still the #1 movie in America (a title it held until April!). Also, following a strong first weekend, the film died, as word of mouth wasn’t great. Why the negative response from audiences? For one thing, word of mouth was prematurely bad: Levinson and Hoffman made “Wag the Dog” during the post-production of “Sphere” and most complained that the De Niro/Hoffman political satire was a comparatively better movie (which is true). “Sphere” was also reportedly re-shot after a failed test screening (apparently, the final scene needed to be clearer) and, really, the movie was no “Titanic”. The biggest complaint came from fans of the book, like myself, who wondered why the most exciting part of the book was not in the movie.

Just as the thrilling river rafting sequence from the novel “Jurassic Park” was not in the movie, the pulse-quickening, giant tentacle attack sequence from Crichton’s book was nowhere in the movie (you see a tentacle, but it never assaults the ship or enters the halls, as it does in the novel). Perhaps the scene would’ve made an already lavish movie too expensive. Yet, the scene’s omission is a disappointment, as it was so vivid and enthralling on the written page. Overall, while imperfect, Barry Levinson’s take on “Sphere” is a brain tickling, funny, exciting and cleverly directed thriller. It was the first big, new event movie of 1998 and deserves a second look.

The Week In Review