The guest list for Starfest is finally shaping up.  An interesting thing that has come up is the announcement that there may be some studio presentations coming to the show, and a bit of speculation has begun as to what movies will be there.  Past presentations have ranged from an exclusive clip of the first five minutes of A Scanner Darkly to full studio presentations with people coming out like Karl Urban for Pathfinder, Oded Fehr for Resident Evil:  Extinction, Christian Bale for Reign of Fire, Tobey Maguire for Spider-Man, the entire cast of Eight Legged Freaks and Tom Cruise for Mission Impossible.

So what’s coming this year?  I have absolutely no idea, but here are nine picks for movies that could concievably be showing up to make presentations.  Props go out to brutus at the Starland.com forums for the inspiration on this article.  There won’t be more than one or two there, but let the speculation continue!  I will insert posters or publicity stills where available.  These are listed in order of release through the end of the year (for better or worse): 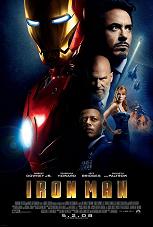 1.)  Iron Man
Why it may happen: I know, a lot of people don’t think this needs any hype.  However, seeing as Starfest is happening a mere two weeks before its theatrical release, this would make for a great opportunity to energize the fanbase and demographic for this film
Why it may not happen:  I’d love for this to happen, but it’s quite possible that Paramount’s marketing department may decide that Denver won’t bring enough attention, no matter what kind of buzz it may generate on the web.  Look for this reason to pop up a few times.

2.)  The Incredible Hulk
Why it may happen:  I know, two Marvel movies?  The thing is that after the trailer released online and on MTV, a lot of the buzz has already deflated.  The same reasoning for Iron Man goes here, but it makes a lot more sense.  Any buzz generating opportunity should and probably will be taken advantage of.
Why it may not happen:  Honestly, you could make the same reason as Iron Man, but since the buzz isn’t that big, I really wouldn’t be suprised to see Edward Norton make a trip to Colorado to talk up his film.

3.)  Hancock
Why it may happen:Honestly, a lot of the negative buzz on this is because it seems there may be Will Smith fatigue, deserved or not.  I personally think the trailer shows some promise and even showing more footage could definitely give the film formerly known as Tonight, He Comes a real shot in the arm.  The reviews haven’t been stellar so far and a presentation could help this film find its audience.
Why it may not happen:  Frankly, Mr. Smith is a VERY busy man, but again I wouldn’t be at all suprised to see Dave McDonnell show us an extended clip during his great Trailer Park presentation this year.

4.)  Hellboy 2
Why it may happen:  If anyone can get fanboys excited and show off some really cool stuff, it’s Guillermo Del Toro.  The man has an enthusiasm that is unmatched in its intensity and its infectiousness.  This is a great way to remind people just how much fun the first Hellboy was and talk about how the new movie ups the ante.  Throw in the fact that this releases before Comic Con and this might just happen.
Why it may not happen:  This would be a huge presentation, and it really depends on whether it’s justified by the studio to have a presence at Starfest as well as Wizard World Philadelphia and Chicago, which both take place after our beloved con and closer to the actual release date.  I’m saying this one isn’t looking good. 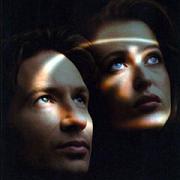 5.)  X-Files 2
Why it may happen:  Were I to be a betting man on what two movies may be making appearances at Starfest, they would be The Incredible Hulk and X-Files 2.  I’ve explained the Hulk, but X-Files 2 really does feel like a slam dunk to me.  The X- Files is an established franchise.  Yes, it may be lost on younger geeks, but the real money spenders (aka my generation and older) who will be at Starfest are absolutely going to flip about this movie.  Giving us some footage of the film itself, and I mean it could be Mulder calling Domino’s for delivery, and it would bring the hype to a fever pitch!  Also, Barry mentioned to me that over the past few years, Fox has done a presentation, so that adds hope as well.
Why it may not happen:  Frankly, Fox knows what they have.  They know that every geek worth their salt may not have this at the top of their must-see list, but it’s an automatic trip to the theater.  They really don’t need the help. 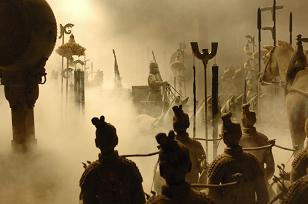 6.)  The Mummy:  Tomb of the Dragon Emperor
Why it may happen:  Please, don’t let this be coming!  Sorry, but I just don’t see this being very good since pretty much nobody from the original two movies are involved with this one outside of Brendan Fraser.  Yes, Jet Li is in it, but that really doesn’t mean squat when it comes to western cinema.  However, this could very well be why it makes an appearance, to try and change people’s minds
Why it may not happen:  I can’t think of a solitary reason, and that just plain scares me.

7.)  Star Wars:  The Clone Wars
Why it may happen:  Don’t go getting too excited about the prospect of the Flannel Jedi making a trip to the Rockies.  I hope we can expect to see a teaser or clips or something along those lines.  They would be featured at Dave McDonnell’s Trailer Park presentation.  It really seems to me that this is a golden opportunity to get people psyched about Star Wars again and it would be a mistake to ignore it.
Why it may not happen:  Unless they want to keep things THAT hush-hush or are THAT behind on production, I would be suprised if we didn’t see something. 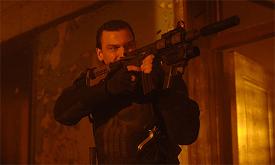 8.)  Punisher:  War Zone
Why it may happen:  I’m sorry, but this thing is on life support.  When you have your lead actor AND your writer (and in the case of the writer, make a point of having your name removed frome the credits) jump ship and the only publicity photo of your new leading man makes him look like Steven Segal, you’re in trouble.  Nobody I’ve talked to cares about this movie in the slightest, and this may be one stop of several cons before its release to try to build up some buzz.
Why it may not happen:  If I were marketing this thing, I’d be looking for every chance I could to try and get positive word on this.  Denver may be one of those chances.  We’ll just see.

9.)  The Day the Earth Stood Still
Why this may happen:  This movie has an uphill battle to make geeks care about this movie.  It’s considered a classic by most sci-fi film buffs, which makes a remake completely unnecessary.  I could see Fox coming to make a case to classic sci-fi fans about why this is a good movie and worth our valuable time and money
Why this may not happen:  Right now, it’s scheduled to come out on December 12th.  That’s a pretty prestigous date.  Either that date is a placeholder until Fox pushes it back into 2009 or beyond oblivion, or they really think they have something good on their hands.  Or they could leave it there and hope it does well…like AVP:  Requiem.  Yeah, that worked great.  Either way, this is a way out and there may simply not be enough material to warrant a presentation.

And there they are!  Feel free to e-mail us or post your own list of what you think may be coming and we’ll see who’s right!  I won’t be shocked if I’m right about one or two of these or something else out of left field (PLEASE…GET SMART) comes out.