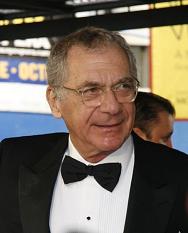 Sadly, we lost one of the great ones yesterday, a warm, extraordinarily talented and accomplished filmmaker and actor in Sydney Pollack.

Following a solid career as a theater and television actor (including parts on Playhouse 90, Alfred Hitchcock Presents and The Twilight Zone), Pollack became an ambitious film director who was always attentive to his actors and picked projects that were diverse, large scale and layered in their portrayals of human nature. While they had big name actors in the leads, his early films were anything but fluffy star vehicles:  They Shoot Horses Don’t They (starring Jane Fonda), Jeremiah Johnson (starring Robert Redford), The Yakuza (starring Robert Mitchum), Three Days of Condor (starring Redford and Faye Dunaway), Absence of Malice (starring Paul Newman), and The Electric Horseman (starring Redford and Fonda) were all richly acted, socially relevant, mature and smartly directed films. The only blemishes on his early track record were The Way We Were (starring Redford and Barbara Streisand), which many tossed off as fluff, despite being a huge hit and Bobby Deerfield, a race car drama that it’s star, Al Pacino, has said was something of a miscalculation.

Following the box office success and multiple Oscar wins for Tootsie (a classic and arguably his best movie) and Out of Africa, Pollack made Havana, his first big budget flop: this Cuba-set romantic epic is a thinly disguised Casablanca remake, stars Redford, Lena Olin and Raul Julia and is one of Pollack’s best, most underrated films. Pollack bounced back a few years later with the blockbuster adaptation of John Grisham’s The Firm and a remake of Sabrina, starring Harrison Ford. Pollack re-teamed with Ford four years later on Random Hearts, a dark, troubling adult drama that was buried by bad reviews and an ad campaign that made it look like an action thriller. Flaws and all, the film is one of Pollack’s most engrossing and has one of Ford’s best, most vulnerable and heartbreaking dramatic performances. Pollack’s last films as a director were the documentary, Sketches of Frank Gehry and the hit Sean Penn thriller, The Interpreter, which plays like an updated Three Days of Condor.

As an actor, Pollack never quit, whether appearing in his own films, like Tootsie, or stealing scenes in other director’s movies. His bit as a terrified doctor in Death Becomes Her is one of the film’s comic highlights, though Pollack was most often cast as corrupt authority figures, as in The Player, Michael Clayton, Changing Lanes, A Civil Action, Husbands and Wives, The Interpreter and Random Hearts.  My favorite of his performances is his wicked supporting role in Eyes Wide Shut, as the unfaithful doctor who tries to save Tom Cruise’s character from the underworld he foolishly explores.

He is survived by his wife of 50 years, Claire Griswold (who, coincidentally, also appeared on The Twilight Zone, but not on the same episode). Our thoughts and prayers go out to his family.