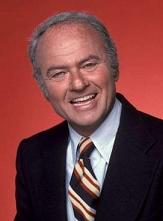 Today is truly a sad day for me in particular. We have lost a true comedy legend in Harvey Korman. Mr. Korman had a spectacular sense of timing and was able to be moustache-twirling evil while being hysterical at the same time. He's known best to movie geeks for his portrayal as Hedley Lamar in Mel Brooks' classic Blazing Saddles. He's also loved for his parts in High Anxiety and History of the World:  Part 1. Some people even know him as the voice of The Great Gazoo in the Flinstones cartoons. I appreciate him in all of those roles as well, but my appreciation for the man started with The Carol Burnett Show.

Harvey is best known for cracking up at what Tim Conway did to him. Unlike what you see on Saturday Night Live, this was a case of genuine and glorious sabotage. Tim was notorious for going through rehersals according to the script, but then doing something completely different when the shows were taped. In light of that fact, I think it's remarkable that he kept it together as long as he did. That's not to say that what Tim Conway did wasn't funny, but it explains all the crackups. His take on Gone With the Wind is the stuff of legends and he was the ultimate straight man to Tim Conway. I'm very disappointed that I didn't get to see these two live when they came through town years ago, and now we've lost this legend.

I'll continue to get great enjoyment from Mr. Korman's work and share his special brand of humor with as many people as I can. You will be missed, Mr. Korman. Our thoughts and prayers go out to Mr. Korman's friends and family.

After the jump, I've embedded a scene from Blazing Saddles and part 1 of an interview done with the Archive of American Television.

The MTV Movie Awards Suck So Much